What first attracted you to the world of Pentesting?

I was sick of the office job I had at the time. I wanted to do an M.Sc. so I could go back and have another year in Uni. I looked down the list of courses and choose Security simply because ‘Computer Forensics’ sounded cool to me (I was wrong about Computer Forensics being cool mind).

I’m in charge of the product strategy for our online platform. It’s basically a creative role where I’m either responding to client's pain-points with new sets of features, or I come up with my own ideas, I think they'll value.

Essentially I lounge around waiting for divine inspiration for a new platform idea. About once every two months, it arrives. Then I simply draw a picture of that idea and hand it over to someone who does the actual work to turn it into a reality. Also, every once in a while I might do some pen-testing - depends on how I feel.

Well, I Co-founded OnSecurity, so I’ve mostly been working on turning nothing into something.

It’s all a bit secret squirrel at the minute but we’re about to release two big features that have never been done before in the world, ever.

I wouldn’t. I’d lie and say I was a Fighter Pilot instead, because no child is going to want to hear about Pentesting.

If you weren’t at OnSecurity, what would you be doing?

Had a few random ones along the way. I worked in a shop on an aboriginal island hundreds of miles off the coast of Darwin. I also spent a year teaching in a school in Tanzania (I do a lot of work for charity actually - but I don’t like to talk about it).

What are three words to describe OnSecurity?

Use Two-factor authentication whenever you can, especially on your main email account.

What are your three most overused words/phrases? What popular quote to you hate?

There’s a few at this stage.

The silence in the office while I try to think of an answer to this ridiculous question.

I saw a family at a restaurant the other day with two young kids, and I’m not exaggerating when I say the parents literally spent the entire time on their phones. So anyway, my hope is that one day us, the people will break the Internet. That we’ll all wake up and say “Whoa, kind of crazy how much time we spent on our phones right?! LOL! Let’s go back to talking to the people who’ve made the effort to actually be in the room with us.”

Play with your kids because they’re growing up quick.

If you could be anyone from any time period who would it be and why?

If you could be anyone from any time period who would it be and why? Queen WotaLoad of the Kingdom OvScheite. She ruled for over 50 years until her death in 1182BC and was most famous for beheading Marketing people who asked hackneyed questions in ‘Meet the Team’ features.

I hold no Guinness World Records for anything. Not even for my considerable charitable work (which I don’t like to talk about). Not one. People find that hard to believe. In fact, I probably hold the World Record for biggest disparity between expected and actual World Records held. 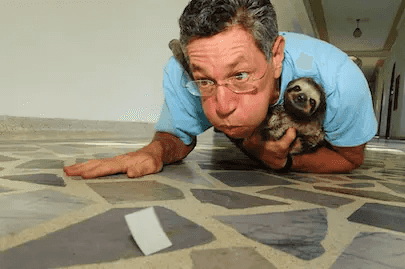